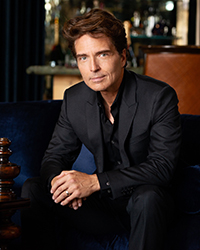 Richard Marx has sold more than 30 million albums worldwide, starting with his self-titled debut which went to No. 8 on the Billboard Top 200 chart. The album spawned four Top 5 singles, including “Hold on to the Nights” and “Don’t Mean Nothing,” which earned him a Grammy nomination for Best Male Rock Vocal Performance. His follow-up, 1989’s Repeat Offender, was even more successful, hitting No. 1 and going quadruple-platinum with two No. 1 singles, “Satisfied” and “Right Here Waiting.” He has since made history as the only male artist whose first seven singles reached the Top 5 on the Billboard charts and has also written on a No. 1 single in each of the last four decades.

The legacy of his career as a songwriter, singer and musician and now author (with the soon-to-be-released memoir, Stories To Tell) is now well established and Richard is happy to continue on his trajectory, wherever it takes him.

“I have so much gratitude,” he says. “I’m so excited that I’m still doing this and it’s on a level that I’m really proud of. It’s amazing that I can go to these places in the world where they might not be able to pronounce my name properly, but they sing along to all the songs in the show. People come back again and again and I’ve very proud of my live show. I want fans to finish my book just as I want them to feel after seeing me in concert. Like they got to know me.”