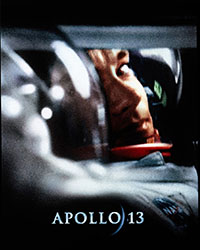 “Houston, we have a problem.” The gripping true story of astronauts Jim Lovell (Tom Hanks), Fred Haise (Bill Paxton), and Jack Swigert (Kevin Bacon) who find themselves in a tense situation as the nation’s third moon landing mission turns life threatening after an explosion depletes the oxygen and electric power. As the three astronauts struggle to stabilize their ship, astronaut Ken Mattingly (Gary Senise) and Flight Director Gene Kranz (Ed Harris) work with the ground crew in a race against the clock to get the three astronauts home safely. Technically accurate (Ron Howard worked with NASA and used special airplanes designed to simulate weightlessness) and expertly crafted, APOLLO 13 remains one of the most intense blockbusters to ever grace the silver screen.