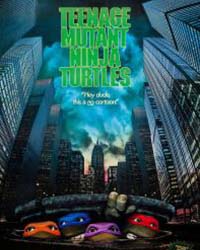 For years Michaelangelo, Leonardo, Donatello and Raphael have lived deep in the sewers of New York City, learning the art of ninjitsu from their mentor, Splinter. Now they face a rising crime wave by a mysterious ninja gang led by the fearsome Shredder. With reporter April O’Neil (Judith Hoag) and the vigilante Casey Jones (Elias Koteas), the Turtles must find a way to work together to beat the Foot Clan. Forget the bland CGI infested reboots, the original film is worth revisiting on the big screen. The most successful independent film at the time (until 1999’s BLAIR WITCH PROJECT), the film was produced by Hong Kong’s Golden Harvest Studios (home of Jackie Chan!), with the Turtles lovingly brought to life by Jim Henson’s Creature Shop. Edited by Sally Menke (the editor of every single Quentin Tarantino movie before her untimely death in 2010), and with a theme song by MC Hammer, it’s lean, green, and on the big screen!