Presented by: Studio Sessions @ the Warner 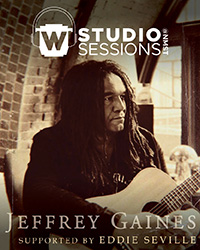 The Warner Theatre is excited to announce a new series of live acoustic concerts, STUDIO SESSIONS @ NMST. Performances will take place in the Nancy Marine Studio Theatre, and begin with Jeffrey Gaines supported by Eddie Seville on Saturday, February 25, 2023, at 8 pm.

ABOUT JEFFREY GAINES Jeffrey Gaines has been heralded for his soul-searching lyrics and his powerful live performances. With only his voice and a guitar for accompaniment, Gaines has earned a reputation as a captivating performer, entertaining his audiences worldwide.

Throughout his three-decade recording career, Gaines has maintained an impressive standard for soul-searching, introspective lyrics and catchy, uplifting melodies. Since bursting on the scene with his self-titled 1992 debut album, the charismatic singer-songwriter-guitarist has built a beloved body of recordings that’s won him a large and deeply devoted international fan base. He has sold out theaters and clubs throughout North America and Europe, and has earned high respect from his peers, Gaines was featured as Special Guest on tours with Tom Petty & The Heartbreakers, Tracy Chapman, Stevie Nicks and Sheryl Crow, among many others.

ABOUT EDDIE SEVILLE Eddie Seville is an American songwriter & multi- instrumentalist, best known as the voice and creative force behind the outlaw rock band, Steel Rodeo.

Drawing from folk, roots and country blues, he's written songs released on Island / Atlantic and Universal Records, as well as music aired on the top three US television networks and HBO.

As a solo artist with an ironic slant and a raconteur charm, he’s been collecting grins, winks & nods in theaters, road houses and folk gatherings throughout the continental US, Europe and Canada.

2023 STUDIO SESSIONS @ NMST will occur throughout the year in the Nancy Marine Studio Theatre located at 84 Main Street in Torrington, CT. Each session will feature an acoustic set by area performers in an intimate setting. Cabaret-style seating will be available at the front of the theatre, as well as regular seating.