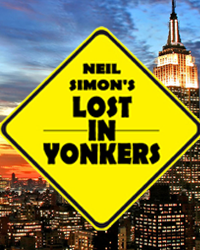 By America's great comic playwright, this memory play is set in a Yonkers in 1942. The hit Broadway production featured Irene Worth, Mercedes Ruehl and Kevin Spacey in award-winning performances. Bella is 35-years-old, mentally challenged and living at home with her mother, stern Grandma Kurnitz . As the play opens, ne'r do-well son Eddie deposits his two young sons on the old lady's doorstep. He is financially strapped and taking to the road as a salesman. The boys are left to contend with Grandma, with Bella and her secret romance, and with Louie, her brother, a small-time hoodlum in a strange new world called Yonkers.