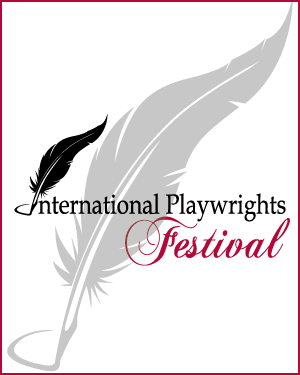 A two day event! The mission of the International Playwright Festival is to recognize the work of emerging and established playwrights and to build a link between playwrights, the theatre community and our audiences. The festival is a celebration of new works by playwrights from across the country and around the globe. For the 6th year, over 200 plays were submitted from across the United States and Canada and as far away as Australia. 9 winners have been selected and one plays invited to participate in the 2017 festival.

This year's festival winners is themed "Things Aren't Always as They Seem" and the schedule is as follows:

FRIDAY, OCTOBER 13, 2017 | 8PM
CRYSTAL BALL by Donna Spector (New York) |Directed by Earle "Wes Baldwin"
Playwright Donna Spector was walking down Lexington Avenue in Manhattan and saw a sign “Psychic Readings” in the window of an exotic looking shop and that sparked the idea for CRYSTAL BALL.

Madame Anastasia, a fortune teller in Manhattan’s West Village, encounters problems when her critical and demanding Ghost Mother emerges from a crystal ball and interferes with Anastasia’s attempts to tell Monique, a young actress, what the future holds for her. Then Paul, a journalist, enters and falls in love with Monique, as predicted rather irascibly by Anastasia’s mother.

SIGNING OFF by Steven Otfinoski (Connecticut) | Directed by Sharon A. Wilcox
Steven Otfinoski is a member of the Dramatists Guild and Squarewrights, a playwrights’ group in Stratford, Connecticut.  Twice a year the Squarewrights  put on an afternoon of ten-minute plays at our local library called “Quickies in the Stacks.”  All the plays must relate to a central theme. In the case of “Signing Off,” the theme was potboilers.

Romance author Delia Lockheart, has come to Dayton, Ohio to promote her latest effort, Passion’s Burning Ember. Among those attending the book signing is Richard Daley, whose wife is one of Delia’s most devoted readers. Richard, however, has his own reasons for meeting Delia and their strange encounter will have surprising repercussions for both of them.

NEVER GIVE UP by James Hutchison (Alberta, Canada) | Directed by Katherine Ray
James Hutchison is a playwright focused on comedy, romance, and mystery.  NEVER GIVE UP was inspired by his own attempts to win the Pint Sized Play Festival in Tenby Wales. Festival

Director Todd Sparks has asked Playwright Nigel Davenport to stop entering the Short Cuts Playwriting Festival because Nigel is such a terrible playwright. But instead of quitting, this only inspires Nigel to try harder so he can win the festival and make his mother proud. (Incidentally this year, after four years of trying, NEVER GIVE UP is also a winner at the Pint Sized Festival in Wales, too)


MOUNTAIN LIFE by Stanley Toledo (California) | Directed by Keith Paul
Stanley Toledo’s full-length plays have been produced by the Morgan Opera House in Aurora, New York, and the Las Vegas Little Theatre in Las Vegas.  He lives in California and the idea for this play came to him while driving in rural Northern California.  Stanley saw a roadside sign that cautioned drivers, “Bigfoot Crossing.”  Fantasizing as hemotored along, he heard bits of dialogue, which soon formed a plot.  The result is a different but interesting story around the Bigfoot legend.

An angry woman on the run stops at a café in the mountains.  The café owner shows her as much local hospitality as he can.  But when a dark limo pulls up to café, the owner soon finds himself in the middle of a situation he wants no part of.

MARK MY WORMS by Cary Pepper (California)| Directed by Taryn Glasser
Cary Pepper has had work presented throughout the United States and internationally. Cary is a member of the Dramatists Guild, and a four-time contributor to Applause Books’ Best American Short Plays series. MARK MY WORMS was inspired by his experiences working in the pre-autocorrect days of typewriters, when it became very clean clear that one wrong letter in a worm word could have profound consequences.

Mason has been cast in a newly-discovered, never-before-seen play by the world-class absurdist LaSalle Montclare. But the play must be performed exactly as written. And Montclare, who worked on a typewriter when there was no Spell Check, was a lousy typist.  Which is why the play opens with Mason holding his costar at gunpoint and having to say, “I’ve got a bun. Come out or I’ll hoot.”

SATURDAY, OCTOBER 14, 2017 |8PM
ITALIAN NOW by Charlene A. Donaghy (Connecticut) | Directed by Matt Cornish
Charlene A. Donaghy: productions and awards from New York City to Los Angeles, in Great Britain and Canada.  Madison Square Productions holds the Broadway option for Charlene’s The Quadroon and the Dove.  Hansen Publishing Group publishes Charlene’s Bones of Home and Other Plays.  Thrice published in Best American Short Plays. Smith & Krause will publish Italian Now in 2018.  Connecticut Regional Representative for The Dramatists Guild of America.   After 9/11, knowing some of her relatives were being ill-treated because of their heritage, one of her cousins said to her “We have to be Italian now.” That statement stuck in Charlene’s head for 15 years and, finally, in 2016, with the debates on who should be in America and who shouldn’t, the voices of her family called out to her, so this play, one of her most personal, was born.

Cousins Fadi and Mahmud are starting a new life with a Middle Eastern restaurant, cooking with their family, bringing to life the old-country recipes of their grandparents.  But, when another terrorist attack befalls the United States, identity and safety come into question with choices forced by the reality of terror.


SAVING GRACE by Bara Swain (New York) | Directed by Rebecca Russo Ozerhoski
Bara Swain’s plays and films have been performed in over 100 venues in U.S. and abroad. Critical Care, featured in Serious Daring: Creative Writing in Four Genres (Oxford U. Press), serves as a key reading for the craft of dialogue.  Other publishers include Smith & Kraus, Art Age Press, Applause Books, and Original Works.  In SAVING GRACE, her goal was to portray the complicated mother/daughter bond, fraught with conflicting expectations and misinterpretations; love and understanding.  She was also inspired by a long-ago memory of her own young daughter, who once begged her to buy her a yo-yo because she said, mournfully, “I have no special skills.”

Underemployed Grace is discovered trying out a new skill – balancing a tennis racket on her finger – when her divorced mother makes a surprise visit.  The play explores responsibility, disappointment and mother/daughter relationships when Grace’s Uncle Lenny ends up in a nearby hospital.

MR. ROYS' BICYCLE REPAIR SHOP by Cynthia Chapman (Massachussetts) | Directed by Lucia M. Dressel
Cynthia Chapman is excited to once again have a piece selected for the WTIPF.  In 2016, Cynthia was an invited Guest Artist for the 10th Kennedy Center Playwrighting Intensive. Her full-length play, SkyChef, was a Playwrights’ Center 2014 Core Apprentice Program Finalist.  She holds her MFA from Lesley University. The first moments in Mr. Roys’ Bicycle Repair Shop’s are inspired from her childhood – as a petite homage to my “Mr. Roys.”  From there, the characters of her life are transformed through the creative machine, creating a modern day story of family and feminist themes that affect children and the adults that love them.

When Mr. Roy’s opens his impromptu bicycle shop, he soon finds out he has much more to repair than Lulu’s suspiciously flat tire.

THE MOURNING AFTER by John Ozerhoski (Connecticut) | Directed by Tony Leone
John Ozerhoski has been involved in the local theatre scene since 1995.  .  He can be heard weekly on the radio as host of FM 97.3 WZBG’s “Backstage with Johnny O”.  As a die-hard Hartford Whalers fan since the age of 14, this story basically wrote itself.  Since 2017 marks the 20th anniversary of when they relocated to NC, John thought there was no better time to pay homage to a team that  was the heart of CT and all things sports.

Two friends sort through the agony of losing their beloved sports team to another state altogether. With the help of some booze, a wife, and their fond memories, they seek to find the closure they have been looking for and a way to reconcile with the realization that they are gone.

A LIGHTER SHADE OF DAVE by Reed Halvorson (South Carolina) | Directed by Sharon A. Wilcox
North Dakota born, Reed Halvorson has called Greenville, SC home for 12 years. An MFA Playwriting graduate from University of Nebraska Omaha, teaches theatre at Christ Church Episcopal School. Along with 6 years in HS education, he is an actor and director in his community. His inspiration is his daughter, Carly.   A LIGHTER SHADE OF DAVE began 7 years ago as a local play festival reading inspired by and prior to a production of Psycho Beach Party. Family is one of Reed’s recurring themes. As a father to a daughter, fictional explorations of their relationship through humor helps him to weather the oncoming storm of her growing up.

A celebration with friends ends in a life-altering surprise for only child, Maddie. Faced with an entirely new look at her parents, Dave and Valerie, this tight-knit family will be forced to redefine their relationship through the lens of love.