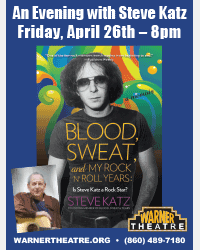 Steve Katz
An Evening of Songs and Stories

Steve Katz, founding member of the legendary bands Blood, Sweat & Tears and The Blues Project will be at the Warner Theatre’s Nancy Marine Studio Theatre on Friday, April 26 at 8pm for an evening of stories and songs.

Steve, a guitarist, songwriter and record producer, was also an original member of Even Dozen Jug Band and American Flyer. As a producer and musician, his credits include albums by the Irish band Horslips, Lou Reed, and Elliott Murphy.

Katz studied guitar with Dave Van Ronk and Rev. Gary Davis. Between 1963 and 1980, he knew and was friends with seemingly everyone in rock 'n' roll and appeared on iconic stages at the Monterey Pop Festival, Newport Folk Festival, Woodstock, the Hollywood Bowl, Carnegie Hall and the Ed Sullivan Show. He dined with Brian Epstein, partied with Groucho Marx, jammed with Mose Allison, worked with the Beatles’ George Martin, shared a bag of potato chips with Jimi Hendrix and was told to get a haircut by Mickey Spillane. He was a producer of hit albums (for Lou Reed), a record company executive (Mercury, Green Linnet) and songwriter ("Sometime in Winter," "Steve's Song”). As a member of Blood, Sweat & Tears, Steve was the recipient of a Grammy award in 1969 for Album of the Year, along with many awards from Downbeat and Playboy magazines.

Today Steve still enjoys playing occasional shows and telling stories of his rock n roll years.  "At the time, I loved what I was doing but never had the sense that this was going to be the future and I was going to be a star... I never thought of music that way. I just thought of it as something very special and I was very happy and lucky to be a part of it."

Steve is married to ceramic artist Alison Palmer and has been a native of Kent CT for over 20 years.

Join us for this evening of songs and memories. Copies of Steve’s  memoir,  Blood, Sweat and My Rock ‘n’ Roll Years: Is Steve Katz a Rock Star will be available for purchase.