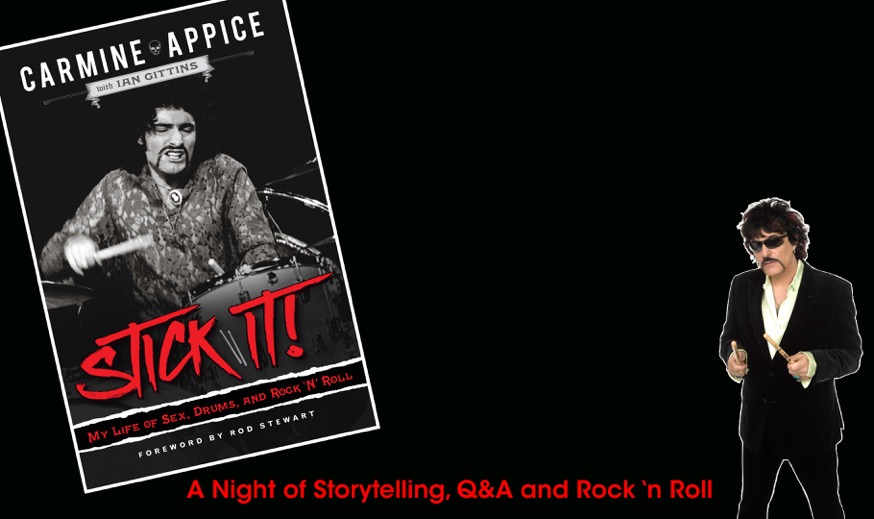 2012 marked the 45th anniversary of the dawn of the career of the legendary Carmine Appice. Carmine has broken new ground in every aspect of his career, as a performer, educator, songwriter, and music producer. Carmine set the foundation for heavy drumming, propelling the bands Vanilla Fudge, Rod Stewart, Ozzy Osbourne, Ted Nugent, and Beck Bogert Appice. He is a multi platinum songwriter having cowritten "Do Ya Think I'm Sexy," "Young Turks" and other monster hits. He came up in the late 60's when rock music was being pioneered by him and his peers Jimi Hendrix, Led Zeppelin, and The Who.

As an educator Carmine was the first to legitimize rock drumming with his landmark book "Realistic Rock" - an award winning and best selling instructional book for 30 years.

With a long career full of achievements, Carmine is universally respected and revered for his technique, creativity, showmanship and business sense. Carmine shares his first hand knowledge of the creation of Rock music with an educational, enthralling multimedia presentation.

“Carmine Appice set the foundation for heavy drumming ... before Bonham, before Ian Paice... before anyone else.”

“The creator of heavy rock drumming as we know it”

“Appice is a legend, an icon and a creator of the highest order”

Carmine provides unique insight, because he was there. Led Zeppelin was his opening act, he played with Jeff Beck and hung out with Jimi Hendrix. But he also went from performer, to hit songwriter, to educator and producer. He can speak to every aspect of the music business from the viewpoint of a prominent participant of 40 years..

Buy To This Event Directions