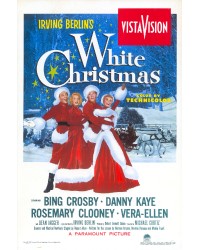 White Christmas Sing-along will be screened at 7 pm. Doors will open at 6 pm for a visit with Santa and Mrs. Claus.

Tickets for this film are $5.

Experience the holiday classic on the big screen! The beloved 1954 film features the songs of Irving Berlin. The lyrics are on-screen so you can sing along with Bing Crosby, Danny Kaye,  Rosemary Clooney and Vera-Ellen to such songs as “The Best Things Happen When You’re Dancing,” “Snow,” “Sisters” and, of course, the iconic “White Christmas.” Filmed in Technicolor.

Bing Crosby and Danny Kaye play nightclub entertainers Bob Wallace and Phil Davis, while Rosemary Clooney and Vera-Ellen are cast as singing-sister act Betty and Judy. The foursome travel to Vermont to visit Bob and Phil’s WII commanding officer, General Waverly (Dean Jagger), who now runs a rustic old inn. Discovering that the general is in dire financial straits, the four entertainers secretly make plans to bail the old guy out with a big musical show, enlisting the aid of Bob and Phil’s army buddies.