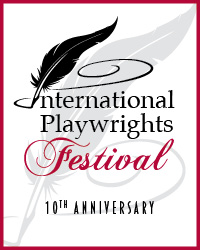 The Warner Theatre will present its 10th Anniversary International Playwrights Festival in person and streaming live from the Nancy Marine Studio Theatre October 15 & 16, 2021. In celebration of our 10th year, the Warner Theatre International Playwrights Festival will be presenting a retrospective of some of our most memorable plays and playwrights! Since our inception, the festival has produced 111 plays from around the world and across the country. This year, we have selected 9 of the best productions from the past 9 years.

The mission of the International Playwrights Festival is to recognize the work of emerging and established playwrights and to build a link between the playwrights, the theatre community and our audiences. The festival is a celebration of new works by playwrights from across the country and around the globe.

The 10th Anniversary festival will feature the following productions (in no particular order):

FINAL REST by Victoria Z. Daly (Connecticut): Chris returns to her empty childhood home to help resentful sister Beth sprinkle Mom’s ashes in the backyard garden. Time’s up: the house will be sold tomorrow. But Chris, unprepared to let go, proposes a plan that threatens to ruin everything.

YESTERDAYS AND TOMORROWS by Gayle Malloy (Western Australia): Is life predetermined? Or can we pull our own strings? Soul thinks we can. She has signed a contract, agreed upon her role, and today is her birthday. But now she is refusing to be born. The clock is ticking. Guardian must somehow persuade her to change her mind. Choices have to be made. Can one ordinary life really be so important?

THE COUNTER OFFER by David L. Williams (Pennsylvania): Negotiation is the name of the game when a representative of the 1% tries to peel one leader away from the Occupy Wall Street protest.

FACING BACKWARDS by George W. Kelly (New Hampshire): The Boston Red Sox, after an 86 year-old drought are now the 2004 World Series Champions. In the immediate aftermath of this victory, two die-hard fans, Sam and Bill, sit in a now empty bar, and come to terms with what has been won, and what may have been lost.

JOANIE & FREDDIE ON VALENTINE’S DAY by Charlene A. Donaghy (Connecticut): In 1945 families are supposed to stay together forever but, sometimes, life intervenes. As Joanie’s family changes, she tries to hold it together with glitter and glue. A chance encounter with the exuberant Freddie might bring a bit of lost joy in the form of youthful innocence.

THE BALLOON HANDLER MAKES GOOD by Mark Charney (Texas): The story of a family of four who travel to Universal Studios for a Christmas vacation. On the first day in the park, the father agrees to be one of the balloon handlers in the Universal Macy’s Day Christmas parade. What begins as a volunteer assignment becomes a life-altering event for the entire family. The play is about what it means to re-evaluate what’s important in mid-life, and about how love brings about acceptance, sacrifice, and a touch of the unexpected.

SKIRTING THE ISSUE by Gary Garrison (New York): Skirting the Issue was inspired by a real-life event in Ireland when a father was reported wearing a skirt to work in solidarity with his young son who wore a skirt to school. He declared that as long as his son was compelled to wear a skirt, he would as well, so that his son felt less alone.

WINTER FLOWERS by Lily Rusek (New York): All her life Delphie has taken care of her sister Rosie who has the mental age of a seven-year-old. Delphie is now seriously ill and will no longer be able to look after her sister. She sells the family home and plans to move them into a nursing facility. However, Rosie refuses to leave the only home she has ever known, forcing Delphie to make a new plan for their future.

THE WONDER OF YOU by Bara Swain (New York): A chance encounter between two lost strangers on the corner of Magnolia and Pine in Chamblee, Georgia helps them find their way.