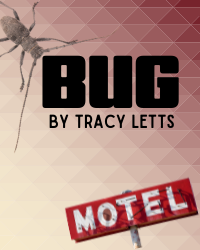 The Stage @ the Warner 2022 Season kicks off with the psychological thriller, BUG by Tracy Letts, presented in the Nancy Marine Studio Theatre February 5-20, 2022!

Set in a seedy Oklahoma City motel room, the play centers on the meeting between Agnes, a divorced waitress with a fondness for cocaine and isolation, and Peter, a soft-spoken Gulf War drifter introduced to her by her lesbian friend, R.C. Agnes stays at a hotel in hopes of avoiding her physically abusive ex-husband, Jerry, who was just released from prison.

At first, she lets Peter sleep platonically on her floor, but it’s not long after she promotes him to the bed. Matters become more complicated as Jerry eagerly returns to the woman he loves to beat her up, expecting to resume their relationship. On top of that, there’s a hidden bug infestation problem that has both Agnes and Peter dealing with scathing welts and festering sores - which has Peter believing this is the result of experiments conducted on him during his stay at an army hospital. Their fears soon escalate to paranoia, conspiracy theories and twisted psychological motives.

“…obscenely exciting…top-flight craftsmanship. Buckle up and brace yourself…” - NY Times. “…[a] thoroughly outrageous and thoroughly entertaining play…the possibility of enemies, real and imagined, to squash has never been more theatrical.” - Associated Press. “…a wonderfully lurid new thriller…” - Star-Ledger. “…a riveting thriller of paranoia and an instant guilty pleasure.” - Hollywood Reporter.

This production contains adult content and may not be suitable for all audiences.