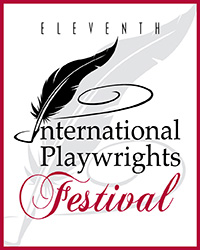 The festival is a two-night celebration of new works by playwrights from across the country and around the globe. 150 plays were accepted for consideration from across the United States, Canada, and Australia, as well as countries in Europe, Asia, and South America. Ten winners have been selected and one play will be invited to participate in the 2022 festival. This year’s winning plays and playwrights are:

LIES MY MOTHER TOLD ME by Anne Marilyn Lucas of Massachussetts - Bill and Marjory have appeared to have an ideal marriage to everyone, especially their daughter Emily. Recently divorced Emily is cleaning her parents attic when she finds a love letter and confronts her mother. Marjory’s explanation falls on deaf ears and Emily threatens to reveal her mother’s duplicity to her father.

ANNE MARILYN LUCAS’ plays have been produced in NYC, Boston, Connecticut, Kansas and Greece. Her work has been done at THE THEATER FOR THE NEW CITY, THE MUSEUM OF JEWISH HERITAGE (Arin Arbus), POLARIS, and THEATRE OF LIGHT in NYC, BOSTON PLAYWRIGHT’S THEATRE, BTM, GLOUSCESTER STAGE, MARBLEHEAD LITTLE THEATRE, THE HOUSE OF THE SEVEN GABLES, THE SALEM THEATRE COMPANY and THE WARNER INTERNATIONAL PLAYWRIGHTS FESTIVAL.

RICKY AND READY by Colleen O’Doherty of Nebraska - A mother and her daughter deal with cancer and terrible self-help book titles together in the library. Can the librarian please help them find answers to this whole dying thing?

COLLEEN O'DOHERTY’s short plays have been part of many festivals (and is thrilled to be back at Warner!) Her full-length play, Stripped, was a quarterfinalist for ScreenCraft's 2018-19 stage play competition based out of LA, part of TheatreMidwest's Fresh Produce Concert Reading Series in October 2020 in Des Moines, IA and a 2020 semi-finalist for UP Theater’s Renewal Reading Series in NYC. https://colleenodoherty.com/

BRAVE BLOOD by Rich Rubin of Oregon - The time, 1942; the place, Washington, DC.. When the American Red Cross decides to segregate the military's blood supply based on race, Dr. Charles R. Drew – the nation's foremost expert on blood banking – points out the illogic and stands up for what’s right.

RICH RUBIN's plays have been staged throughout the U.S., as well as in Europe, Asia, Australia, New Zealand, Canada and Mexico. Full-length plays include PICASSO IN PARIS (winner, Julie Harris Playwright Award); CAESAR'S BLOOD (finalist, Oregon Book Award); and KAFKA'S JOKE (finalist, Woodward International Playwriting Prize). www.richrubinplaywright.com LIKE CLOCKWORK by Andrada Angileri of New York - After spending the night celebrating Molly's 30th birthday, Alan and Molly return to their apartment to unwind, but not everything is as it seems.

ANDRADA ANGILERI (she/her) is an NYC-based actor and playwright. She graduated from SUNY Purchase last May and is attending the Terry Knickerbocker Studio to further her acting training. SHELTER IN COMFORT by Rex MacGregor of New Zealand - A privileged woman shelters from the rain in a furniture store

REX MCGREGOR is a New Zealand playwright. His short comedies have been produced on four continents from New York and London to Sydney and Chennai. Website: https://www.rexmcgregor.com/

FREAK OUT by Charlene A. Donaghy of Connecticut.

SLAMMIN’ THE BONES by Cliff Odle of Maine – In the aftermath of an arrest gone tragically wrong, a Cop and a Drug dealer try to find clarity

CLIFF ODLE is a playwright, and a resident of Maine on faculty at Bates College. This fall he will be moving South to to teach at the UNC School of the Arts. Cliff’s plays: The Nine Who Dared (Theater Espresso), The Lesson and Friends Like These (Deana’s Educational Theatre), Lost Tempo (Boston Playwrights Theater, IRNE Award nomination, best new play), Our Girl in Trenton (Boston University/New Rep Theater, Smith Prize nominee).

OFFENDED by Reed Halvorson of South Carolina - After a high school art competition, a surprise controversy arises from an art piece depicting a nude angel. Meeting in the principal's office, two families are forced to come to an understanding when their status in the situation is drastically different. A modern look at the changing social landscape with a seething underbelly of dark humor, the definition of what can "offend" us is questioned.

REED HALVORSON holds an MFA in Playwriting from University of Nebraska Omaha and a BA in Theatre from Minnesota State University Moorhead. He is in his 6th year at Christ Church Episcopal School, his 11th as a HS teacher, and was selected in 2019 as the “Jones Award” recipient. He earned “Best Director” at the SCTA HS Play Competition in 2018 & 2019. As a playwright, The Purest Form of Hope was a co-winner of Centre Stage’s New Play Festival. He is currently the President of South Carolina Theatre Association. He is the proud father of a 15 year old daughter, Carly.

CHOOSE! by Bara Swain of New York - Ava knows that something is terribly wrong when Joanie doesn't show up for water aerobics in this two-hander for women that explores friendship and grief. BARA SWAIN's plays and monologues have been staged in 200+ venues in 28 states and seven countries, including 40+ virtual performances and ten short films. She is thrilled to share her voice again at Warner Theatre! Special thanks to theatre artists extraordinaire, Charlene and Sharon. www.BaraSwain.com EXTRA TALL, PLEASE by Dan Bancroft of Maine - An end-of-life conversation between Murray, the soon to be deceased, and Skippy, his funeral director, that reminds us it is never too late to change one’s destiny.

DAN BANCROFT’s plays have been performed in Boston, NY, England, and Germany, and include Let, Choices, What’s Really Good, Five Guns, Four Bullets, and Leave the Cannoli. He is a member of the Dramatists Guild, The Playwriting Center, Maine Writers and Publishers Alliance, Page to Stage, and Wild Geese Writers.

BETWEEN AUSTIN AND SAVANNAH by J. David Cook of Florida - After months, or possibly years Savannah begins to question the life that she and Austin are forced to live as a result of their choices. With memories of her past life fading, Savannah asks Austin what keeps him going day after day, and whether or not it’s really worth it.

J. DAVID COOK is a writer and theatre teacher out of Central Florida. He found his love for playwriting while creating one-act plays for his Thespian troupe. He currently lives in the Orlando Florida area with his wife, Janet, and their three corgis; Merry, Benedick, and Desdemona.

The Stage @ the Warner presenting sponsor is Hartford HealthCare/Charlotte Hungerford Hospital. The Studio Theatre Series is sponsored by Northwest Community Bank.
Buy To This Event
Directions