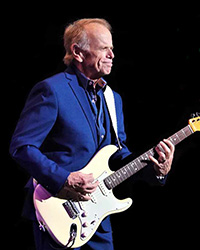 Featuring Carnie and Wendy Wilson with Matt Jardine
Presented by: Live @ the Warner

Al Jardine, an original and co-founding member of The Beach Boys is bringing his Family & Friends Tour to the Warner's Main Stage! The Beach Boys’ legend will be joined on stage by Carnie and Wendy Wilson of Wilson Phillips. The ladies are the daughters of Brian Wilson, who co-founded The Beach Boys with Al Jardine and wrote many of the group’s iconic hits. “Family & Friends” will also feature Al’s son, Matt Jardine, who has toured for many years with both The Beach Boys and Brian Wilson. Matt has received rave reviews from both fans and critics for his stunning lead vocals on songs like “God Only Knows”, “Don't Worry Baby”, and “Surf's Up”. The eight-member band for the tour will be led by Rob Bonfiglio, who is Wilson Phillips’ musical director and performs regularly in Brian Wilson's band.

Audiences will enjoy legendary hits of The Beach Boys, including “Help Me”, “Rhonda”, “California Girls”, “I Get Around”, “God Only Knows”, and “Good Vibrations” to name a few. The show will also feature the Wilson Phillips catalogue, including “Hold On”, “The Dream is Still Alive”, “You’re In Love”, “Impulsive”, and “Release Me”.

This is a must-see once in a lifetime event!