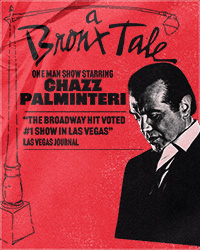 The critically acclaimed, original one-man show A BRONX TALE starring Academy Award nominated actor, writer and director Chazz Palminteri, is coming to the Warner Theatre’s Main Stage! Bronx-born and raised Chazz Palminteri was a natural choice to continue the Italianate torch in film. In the tradition set forth in the 1970s by such icons as director Martin Scorsese and actors Robert De Niro, Al Pacino, John Cazale and Joe Pesci, Palminteri has brought grit, muscle, and an evocative realism to the sidewalks of his New York neighborhood, violent as they are and were.

In 1988 he wrote for himself a play entitled "A Bronx Tale," a powerful one-man stage commentary in which he depicted his bruising childhood in great detail, which included witnessing gangland slayings. Palminteri brought each and every character to life (18 in all) in this autobiographical piece -- his friends, enemies, even his own family. He showcased for years in both Los Angeles and New York, finally sparking the interest of his film idol, Robert De Niro. DeNiro saw the potential of this project and brought both it and the actor/writer to the screen. Palminteri played one of the flashier roles, Sonny, a gangster, in the movie version. An unknown film commodity at the time, Chazz had stubbornly refused to sell his stage property (the offers went into the seven figures) unless he was part of the package as both actor and screenwriter. DeNiro, who became his mentor, backed him up all the way, and the rest is history. A Bronx Tale (1993), which featured his actress/producer/wife Gianna Palminteri, earned strong reviews.

At age 41 Palminteri had become an "overnight" star. Other important projects quickly fell his way including Bullets Over Broadway (1994), The Perez Family (1995), and The Usual Suspects (1995). Though Palminteri was invariably drawn into a rather tight-fitting, often violent typecast, it has been a secure and flashy one that continues to run strong into the millennium.