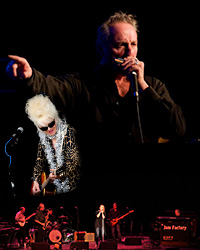 With Christine Ohlman
And THE JAM FACTORY
Presented by: Live @ the Warner

Get ready for a night of blues when The James Montgomery Band with Christine Ohlman and the Sax Attack Horns and The Jam Factory visit the Warner Theatre on Saturday, April 30 at 8 pm!

A musician of many talents, James Montgomery has ruled as an iconic figure in blues music for over 40 years. He’s an accomplished blues harpist, singer, front man and bandleader, lending these talents to his own band, The James Montgomery Band, and to countless sessions and tours over the years with the likes of Gregg Allman, Johnny Winter, B.B. King, Muddy Waters, Buddy Guy, Aerosmith, the Rolling Stones, Joe Cocker and James Brown. He’s also hosted his own syndicated blues radio show, interviewing, and playing the music of numerous blues and blues-rock luminaries.

The heart of Christine Ohlman has belonged to rock n’ roll from just about the moment she could walk and talk. She’s the current long-time vocalist with the Saturday Night Live Band, whose latest CD, The Deep End, was honored on five national Top Ten Lists. Ohlman’s legendary voice and stage presence (she’s known as “The Beehive Queen” for her towering blonde hairdo) have recently been featured at the 2018 AMA Conference in Nashville, on SNL’s 40th Anniversary telecast (pulled onstage by Jimmy Fallon at the after-party concert at the Plaza Hotel, she tore the roof off with the B52s as her backup vocalists!), the Carnegie Hall tribute to the Rolling Stones, and more.

The Jam Factory is a tribute to “authentic” rock and roll, and rhythm and blues, with a touch of soul, funk, and metal. It is not a tribute to any specific artist, style, or genre of music. This is a pro-level, well produced, well oiled, music machine. The players have performed individually from the East Coast to the West, Maine to Florida, and some abroad. Since debuting in the summer of ’17, they have been on theater stages around CT with the line-up of the fabulous Jen Vailmont from Naugatuck with her powerful vocals, Pete Regis on sax from Torrington, Pete Hurlbut on guitar from Winchester, Roy Scaturo on bass from Milford, Tony Talmich on drums from Colorado Springs, and the mighty Hammond organ, Michael Kerish, originally Binghamton, NY, now Torrington. This band delivers the real deal and is one you will want to see again.