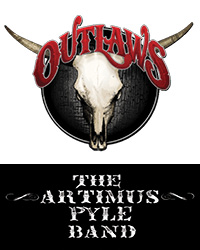 With Artimus Pyle
Presented by: Live @ the Warner

The Warner Theatre will welcome The Outlaws with The Artimus Pyle Band to the Main Stage on Friday, June 10, 2022 at 8 pm.

For The Outlaws, it’s always been about the music. For more than 40 years, the Southern Rock legends have celebrated triumphs and endured tragedies to remain one of the most influential and best-loved bands of the genre. Today, The Outlaws have returned with new music, new focus, and an uncompromising new mission: It’s about a band of brothers bound together by history, harmony, and the road. It’s about a group that respects its own legacy while refusing to be defined by its past. But most of all, it’s about pride.

It’s About Pride was also the title of the band’s acclaimed 2012 album, universally hailed as their victorious comeback. “Because The Outlaws had been out of the public eye for so long, it was almost like starting over,” original singer/songwriter/guitarist Henry Paul explains. “But because of the band’s history, we’re still seeing this as a new chapter. What our fans loved then is what they still love now, because we are just as good or even better than we were.”

Along with founding member Paul, the band features several of Southern Rock’s most respected players: Keyboardist/vocalist Dave Robbins is a co-founding member of BlackHawk and has written hits for artists that include Restless Heart, Kenny Rogers and Eric Clapton. Longtime bassist/vocalist Randy Threet has performed with Trisha Yearwood, Pam Tillis, and BlackHawk, and is familiar to audiences from USA Network’s ‘Nashville Star.’ Lead guitarist Jimmy Dormire has played to millions with Confederate Railroad, Colonel Bruce Hampton, and The Luke Wheeler Band on the TV series Nashville. Drummer Michael Grando – who replaces the band’s retired/beloved co-founder Monte Yoho – has powered the beat for artists that include Joe Diffie, Jason Aldean, and Chris Knight. Vocalist/co-guitarist Jeff Aulich brings new fire to the band’s harmony arrangements and six-string pyrotechnics. The Outlaws have not only re-emerged as what fans now call ‘Southern Rock’s Last Band Standing,’ but as a dedicated band of brothers who still write, play and perform with the skill, grit, and fire of acts a fraction of their age. “I want the fans to see the band’s growth and recognize the quality of the music,” Henry says. “We’re focused on where we come from, where we’re headed and how much fun we’re still having on the ride.”

The Artimus Pyle Band is a high energy, true to the music, and true to the era rock group. One of the few that is on the road today. Artimus Pyle, Brad Durden, Jerry Lyda, Dave Fowler, and Scott Raines are not only a group of friends and contemporaries but a group with some of the most seasoned musician in the southeast. More than just a "tribute" to Lynyrd Skynyrd a tribute to the man that defined it, Ronnie van Zant. Artimus Pyle has said " If it wasn't for Ronnie, no one would know my name." Since his departure from Skynyrd in 1991, Artimus Pyle's career has led him down an amazing path of solo records and projects culminating into one the finest tributes to southern rock royalty. APB delivers hit after hit after hit, night after night after night. From Freebird to Sweet Home Alabama, APB gives fans the best of Skynyrd with one of men who made it!