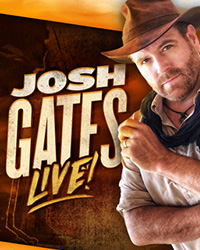 AN EVENING OF LEGENDS, MYSTERIES
AND TALES OF ADVENTURE!
Presented by: Live @ the Warner

Join explorer, talk show host, and author Josh Gates from Discovery Channel’s smash-hit series, Expedition Unknown and Josh Gates Tonight for an evening of adventure on the Warner’s Main Stage Friday, August 5 at 8 pm! Tickets are on sale to Warner Members Tuesday, April 12 at 10 am and to the General Public, Friday, April 15 at 10 am.

Josh will take viewers around the world and off-the-map with stories from his greatest expeditions and insights into the world’s greatest mysteries. From hilarious misadventures to thrilling moments of discovery, Josh keeps audiences on the edge of their seats.

Josh Gates is the face of adventure of Discovery Channel and is host and executive producer of the smash-hit Discovery series, Expedition Unknown. The show follows Gates as he sets out on a global journey to explore archaeological discoveries, historic mysteries, and scientific breakthroughs. Josh is also the host of Discovery’s new, hit show Josh Gates Tonight, which Collider recently declared “the best talk show going for film nerds and genre fans.” Josh also helmed and co-executive produced the hit Syfy Channel series, Destination Truth. Each week, Gates and his intrepid team set out to investigate age-old legends, featuring remote and often never-before-filmed locations.

Josh holds degrees from Tufts University in Archaeology and Drama, serves as a trustee on the governing board of the Archaeological Institute of America, and is a fellow of The Explorers Club - a prestigious organization dedicated to the advancement of exploration and field research. He has appeared on The Today Show, CNN, and a variety of other national television and radio programs. Even more of Josh’s travels are chronicled in his bestselling book, “Memoirs of a Monster Hunter.”
Buy To This Event
Directions