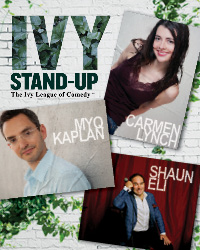 The Warner Theatre will welcome comedians Myq Kaplan, Carmen Lynch and Shaun Eli of The Ivy League of Comedy to the Nancy Marine Studio Theatre on Saturday, July 9 at 8 pm. The Ivy League of Comedy is the premier group of stand-up comedians touring America. You’ve heard their brilliant comedic voices on late-night TV and Comedy Central, now come see them live on stage! Known for their elite brand of clever comedy, The Ivy League of Comedy honors audiences with original, well-written comedy that doesn’t resort to playing on stereotypes or picking on the audience.

Myq Kaplan has appeared on The Tonight Show, Conan, Letterman, James Corden, Seth Meyers, Comedy Central, Last Comic Standing, and America’s Got Talent. He has a one-hour standup special on Amazon, “Small, Dork, and Handsome,” and two podcasts, The Faucet and Broccoli and Ice Cream. His first album, “Vegan Mind Meld,” was one of iTunes’ top 10 comedy albums of the year, and his newest album, “A.K.A.,” debuted at #1. The NY Times called it “invigoratingly funny” and included it among its five “coronavirus best new comedy specials”… “to remind you of the old normal.” And now, here we are in the new weird!

Carmen Lynch is based in NYC and has been featured on a string of late night shows including The Late Show with David Letterman, The Late Show with Stephen Colbert, Conan, and The Late Late Show with Craig Ferguson. Carmen has also been seen on The Good Wife, Inside Amy Schumer, and This Week at the Comedy Cellar. In 2017 Carmen performed a sold-out run at the Edinburgh Fringe Festival with her show “Lynched” and has also traveled extensively performing for the troops throughout the Middle East and Africa. Carmen also works in Spanish-speaking countries doing standup in Spanish. Her comedy album “Dance Like You Don’t Need the Money” was reviewed by The New York Times as “one of five to stream” and was voted the #1 comedy album in 2017 by SiriusXM.

Stand-up comedian Shaun Eli has rightfully been called one of America’s smartest comics. Whether it’s a story about dining with a vegetarian or successfully fighting a parking ticket in criminal court, master storyteller Shaun Eli shows you that there’s hilarity in the ordinary if you approach life with a comedic warp. Job interviews? How about the Ten Commandments? For just about anything he’s experienced he has hilarious stories at the ready. With a sense of humor that’s both cheerful and universal Shaun has headlined shows on five continents. In 2021 he was the recipient of a major profile in The New York Times. Visit Shaun Eli's site at www.BrainChampagne.com

This hilarious comedy show is as perfect for entertaining your clients, for a great date or a casual night out with friends. Wouldn't you rather be the one talking about the show instead of just hearing about it later? Don't be disappointed that you missed out, get your tickets now!

www.IvyStandup.com
Buy To This Event
Directions