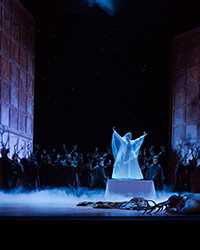 Giuseppe Verdi
Presented by: The Metropolitan Opera Live in HD