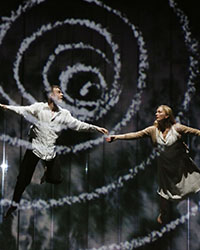 One of opera’s most beloved works receives its first new Met staging in 19 years - a daring vision by renowned English director Simon McBurney that The Wall Street Journal declared “the best production I’ve ever witnessed of Mozart’s opera.” Nathalie Stutzmann conducts the Met Orchestra, with the pit raised to make the musicians visible to the audience and allow interaction with the cast. In his Met-debut staging, McBurney lets loose a volley of theatrical flourishes, incorporating projections, sound effects, and acrobatics to match the spectacle and drama of Mozart’s fable. The brilliant cast includes soprano Erin Morley as Pamina, tenor Lawrence Brownlee as Tamino, baritone Thomas Oliemans in his Met debut as Papageno, soprano Kathryn Lewek as the Queen of the Night, and bass Stephen Milling as Sarastro.

CHERIE CALUDA, soprano and Associate Professor of Voice at the The Hartt School, has demonstrated versatility throughout her career, excelling in opera, oratorio, song and chamber music. Since at The Hartt School, she’s established herself as a champion interpreter of contemporary works having collaborated with numerous composers to perform their works, including Sparrows with Pulitzer Prize-winning Joseph Schwantner and Mr. Tambourine Man: Seven Poems by Bob Dylan with Academy Award-winning John Corigliano. Ms. Caluda’s recording, I dwell in Possibility, was released in 2014. Through the exquisite settings of Emmy Award-winning John Musto, Hartt’s own Larry Alan Smith and Juliana Hall, she brings the words of American women poets to life. The composers are also featured on the piano performing their pieces with her. The American Record Guide proclaimed that her “singing is exquisite; she never loses the dramatic or vocal line, and her diction is excellent.”