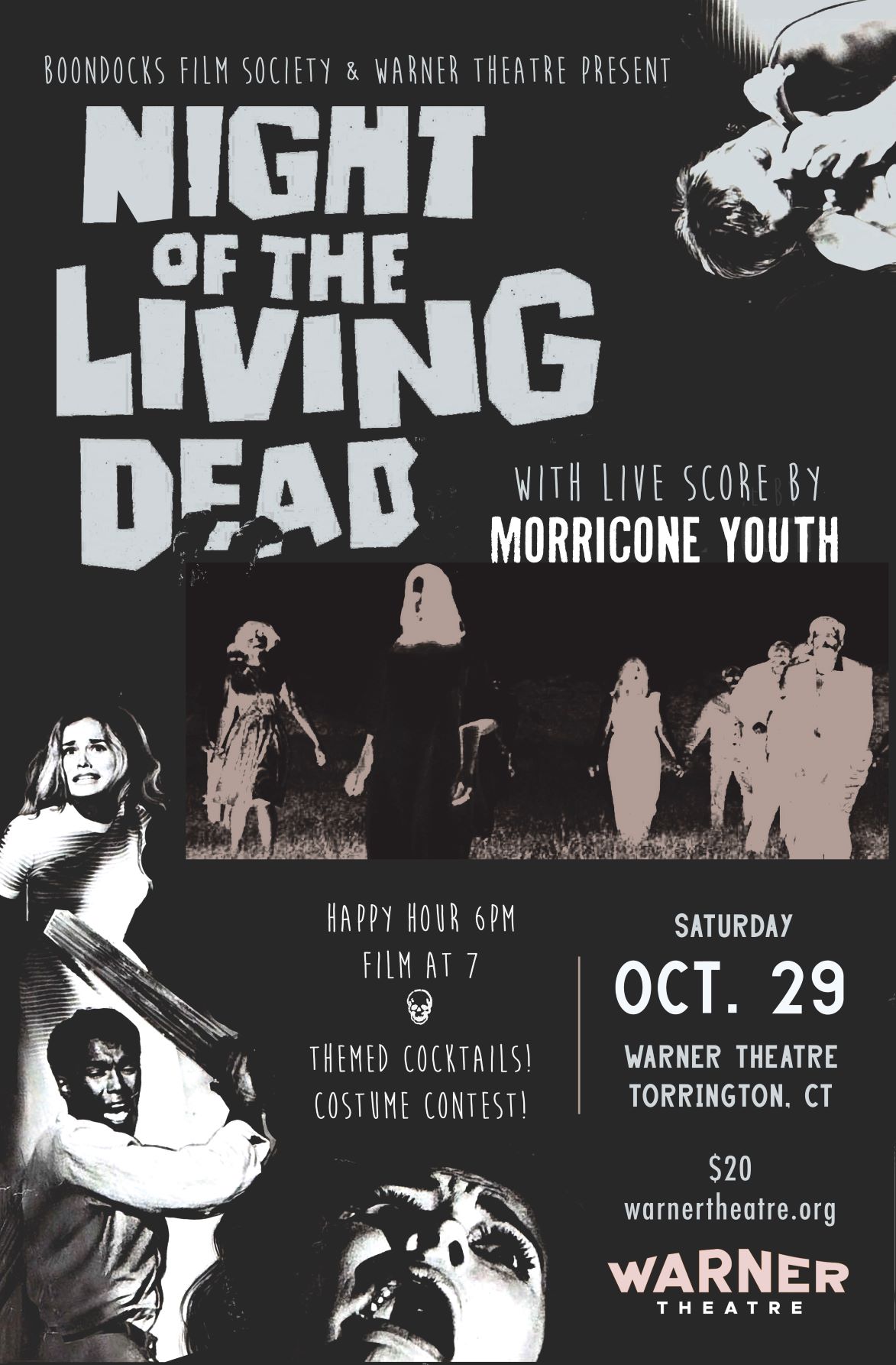 Film event pop-up Boondocks Film Society and Movies @ the Warner are bringing a one-of-a-kind film experience to Torrington, for one night only, on Saturday, October, 29, 2022. The Warner’s majestic Oneglia Auditorium will host a screening of George Romero’s landmark thriller Night of the Living Dead, punctuated by an original live score by NYC film-score rockers Morricone Youth!

The event begins at 6 pm on Saturday, October 29 with the film screening at 7 pm, at the Warner Theatre, located at 68 Main St. in Torrington, CT. Admission is only $20, with drinks sold separately. Tickets are on sale Tuesday, September 27 at 10 am. For tickets, visit warnertheatre.org or call (860) 489-7180.

The evening will kick off with a lively and entertaining pre-film happy hour, featuring mixologist-created themed craft cocktails and a zombie costume contest. Attendees can come dressed as the undead for a chance to win prizes donated by local businesses. Everyone will also receive a free commemorative poster designed by a local artist.

The event’s centerpiece will be a screening of the groundbreaking cult zombie flick Night of the Living Dead. Consistently ranked among the greatest films of all time, and a landmark in the horror genre, Night of the Living Dead moves deftly from dark humor to suspense to horror – touching upon race and gender dynamics and delivering unexpected plot twists along the way.

George Romero’s revolutionary low budget, black-and-white horror masterpiece still packs a punch almost 55 years after its release. To complement the angst and action on screen, Morricone Youth composed a tense and dynamic score and will perform it live! You can get a taste for their spellbinding score at morriconeyouth.bandcamp.com

The band hails from New York City, and has been writing, performing and recording music written for the moving image since 1999. Boondocks and the Warner are excited to welcome them to the Northwest Corner to perform one of their most popular compositions.

Boondocks Film Society is a semi-immersive, pop-up film event series that pairs rep-house film with unique venues throughout the Litchfield Hills, Berkshires and Hudson Valley. Working with area artists and creative businesses, Boondocks builds events around some of our favorite films, complete with themed live music, film-inspired craft cocktails, chef-created movie-themed menus, artist-designed commemorative posters and much more. Through thoughtful programming and creative partnerships, Boondocks has set out to expand the bounds of what’s shown in our area, and spotlight some of the area’s top creative talent, including filmmakers, musicians, poster artists, chefs, mixologists, sculptors, puppeteers and more.