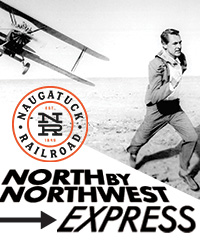 Tickets Are Available At rmne.org
Presented by: Movies @ the Warner and Naugatuck Railroad

The Warner Theatre is excited to announce a brand new, one-night experience presented in partnership with Naugatuck Railroad. NORTH BY NORTHWEST EXPRESS will take place on Friday, December 30, 2022, and feature a night full of activities surrounding a screening of the iconic Alfred Hitchcock film, “North by Northwest” in the Warner’s historic Oneglia Auditorium.

North by Northwest Express Schedule: The event will begin with a Naugatuck Railroad train ride from Thomaston to Downtown Torrington. Original passenger cars New York Central Hickory Creek and Tavern Lounge 43 from the famous 20th Century Limited Passenger train featured in the film will be in tow!The train will depart at 6 pm, and seating is limited to 300.

Once the train arrives in Torrington, patrons will take a stroll to Salt 2.0 where they will be treated to dinner. The movie will begin at 8 pm, and the train will head back to Thomaston afterwards (10:30 departure).

Participants are encouraged to dress up in 50’s themed attire!

This holiday season the Naugatuck Railroad has partnered with the United Railroad Historical Society of New Jersey to bring two restored operating passenger cars from the Famous 20th Century Limited Train. These two cars, Hickory Creek and Tavern Lounge 43, will be visiting the Naugatuck Railroad for the Holiday Season. More information can be found at rmne.org/20th-century-limited/