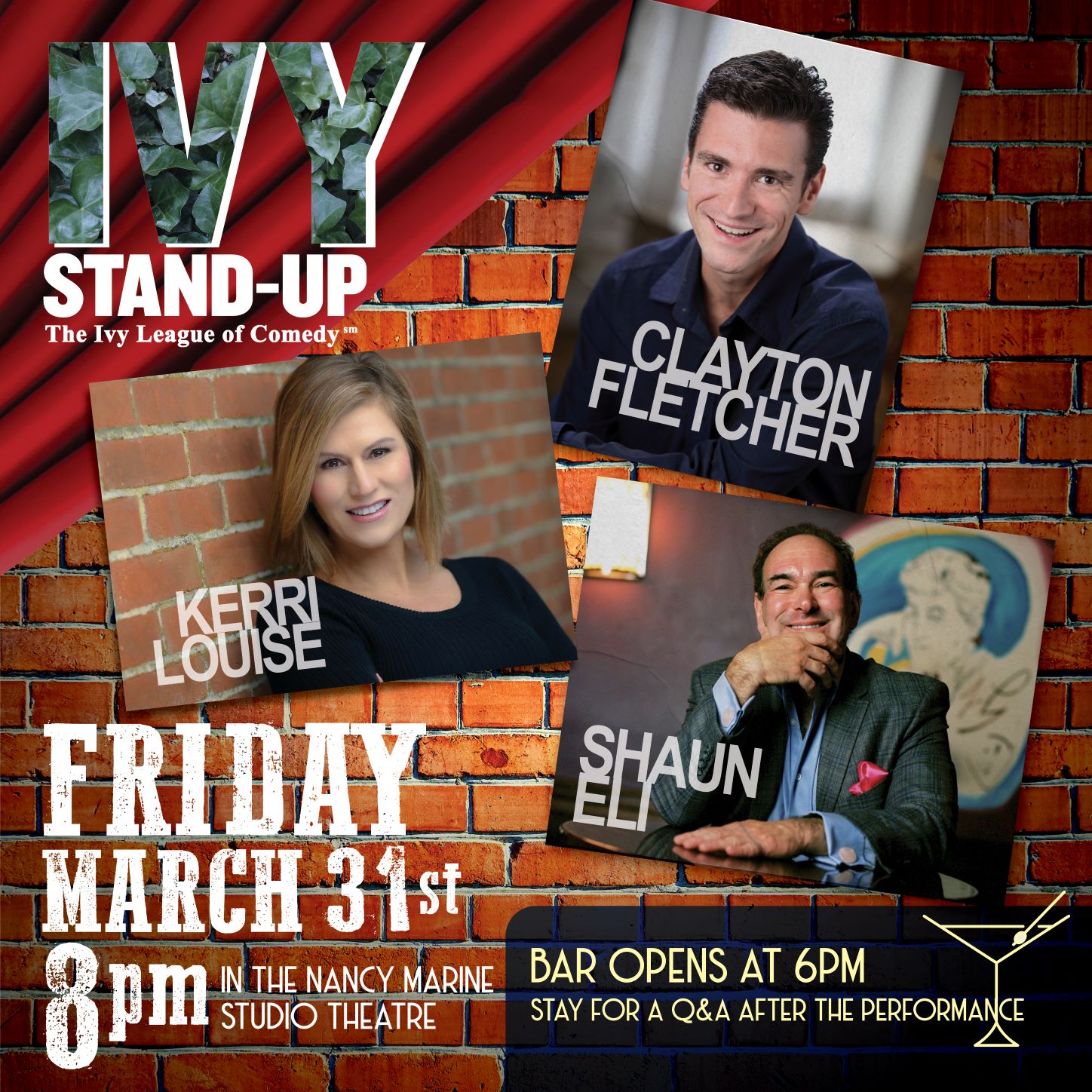 The Warner Theatre is excited to welcome comedians Kerri Louise, Clayton Fletcher, and Shaun Eli of The Ivy League of Comedy to the Nancy Marine Studio Theatre on Friday, March 31, 2023, at 8 pm! Tickets are on sale to Warner Theatre supporters Tuesday, December 6 and to the general public Friday, December 9 at 10 am.

The Ivy League of Comedy is the premier group of stand-up comedians touring America. Known for their elite brand of clever comedy, you’ve heard their brilliant comedic voices on late-night TV and Comedy Central. Now come see them live on stage!

Come early and stay late for a comedy cocktail hour! The bar will open at 6 pm and stay open throughout and after the performance for a meet & greet with the comedians!

High-energy, commanding and versatile- but enough about her sex life- Kerri Louise can entertain any audience with her warmth and razor-edge wit. So it's no wonder that Kerri was a regular correspondent on the Oprah Winfrey Show. Because of that, Kerri was asked to be on the very first episode of the Dr. Oz Show. NBC took Kerri all the way to the finals in the show Last Comic Standing. Her performance on that show prompted The Women's Entertainment Network to make her the star of their new reality show called "TWO FUNNY." Kerri's guest appearances include Nick Mom Night Out, Comics Unleashed, The Montel Show, The Fine Living Channel, Access Hollywood, The Apprentice, The View, Comedy Central, VH1, 20/20 and New Joke City. These credits plus her appearance in the Marie Claire Magazine, the HBO Aspen Comedy Festival and the Montreal Comedy Festival have made Kerri an attraction.

Heard every day on Sirius/XM Radio's Laugh USA, Blue Collar Comedy, and Jamie Foxx's Foxxhole stations, Clayton Fletcher is an American stand-up comedian who lives in New York City and performs throughout the USA, Europe, Australia, and Caribbean. Recently named 'Best of the Fest' at the Stockholm Comedy Festival, Clayton's has been featured on Hulu-TV's "Comedy Brew," MSNBC's "Your Business," ESPN's "World Series of Poker," and Comcast-TV's "Who's Laughing Now?" Clayton Fletcher allows us to see the world through the eyes of the son of a poker-playing mom and a jazz musician dad. His smart, clean, provocative comedy is geared towards audiences hungry for laughs without all of the crude shock value relied upon by so many modern stand-up comics. This comic proves once and for all that funny is funny, no matter who or even where you are!

This hilarious comedy show is as perfect for entertaining your clients as for a great date or a casual night out with friends. Wouldn't you rather be the one talking about the show instead of just hearing about it later? Don't be disappointed that you missed out. Buy your tickets now!
Buy To This Event
Directions