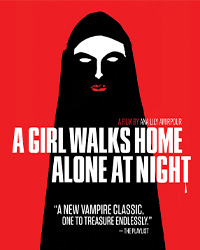 Presented by: Movies @ the Warner and Boondocks Film Society

Boondocks Film Society and Movies @ the Warner present the visually arresting 2014 film A Girl Walks Home Alone at Night and a haunting pre-film performance by internationally acclaimed recording artist Simone White on Saturday, January 21st at 7 pm in Torrington – with a portion of the proceeds to benefit the protests for basic human rights in Iran.

The evening will also include a happy hour with film-inspired craft cocktails, an artist-designed commemorative poster and more to be announced as the date approaches. The event will take place in the Warner’s Nancy Marine Studio Theatre, which will be dressed in dark hues and ominous shadows for the occasion.

A Girl Walks Home Alone at Night is an Iranian vampire western, set in a largely abandoned oil refinery town called Bad City, where local men have been turning up dead in such numbers that the bodies are beginning to fill the local culvert. Directed by Ana Lily Amirpour, an outspoken critic of the Iranian government and supporter of the ongoing protests, the film balances a whole lot of style – lush black-and-white landscapes; a singular soundtrack; and touches like a vintage ’57 T-Bird and a heroine fond of turntables and skateboards – with a substantive skewering of Iran’s heavy-handed and oppressive patriarchy. The film was released to near-universal critical acclaim and made many best-of lists in 2014.

“A Girl Walks Home Alone at Night is a surprising package,” says Boondocks co-founder Jeff Palfini. “It’s got the hip detachment of a Jim Jarmusch film, the moody and sumptuous visuals of something like Let the Right One In, along with the subtle but biting cultural critique of Bunuel or Fellini.”

As the fourth collaboration between Boondocks and The Warner, this promises to be a truly unforgettable evening of film, music, craft cocktails, community and more – and a great opportunity to show support for the young people risking their lives to stand up for women’s rights in Iran.
Buy To This Event
Directions